Equipment, Knowledge, and Execution (The Triad of Tournament Success)

As the title of this article suggests for tournament success, there are three major components to being a successful and hopefully profitable tournament angler or team. All three of these components must work together in harmony and be in tune with each other to further a positive outcome. This article will be broken down into three sections delving into the particulars of each separate component of the triad as well as how they interact together.

Equipment is the pure physical part of the triad equation. It consists of all the tangible items that can be touched and felt. Items include boat, motor(s), trailer, rods, reels, line, lures, terminal tackle, nets, electronics, planer boards, downriggers, rod holders, safety equipment, and of course a reliable tow vehicle.

The boat, motor, and trailer must be of adequate size to handle the body of water on which it will be deployed. Most importantly, it must be safe and seaworthy. The must be large enough to carry not only the team members but also all of the equipment that may be necessary to use. While participating in tournaments that may be many miles from home, one would not want to be caught without some of the tackle that they may need. For example, over the course of several years of fishing the Lake Ontario Niagara County Pro-Am, contestants have had to fish for different species of salmonids in different years. Some years, due to available species ready to catch, one might have to fish for Steelhead, Brown trout, Coho salmon, or King salmon to box out with 12 fish each day during a two day tournament. Lake trout can also be counted in the mix.

To make matters even more challenging one might be required to fish on the surface to over a 150ft down in the water column depending on the sought after species. Imagine being over a 150 miles from home and not having the necessary equipment and tackle to get the job done? Also imagine that there are some very aggressive competitors that would go so far as to go to all of the local tackle shops and buy up all of the hot lures that are working so that others can’t obtain any. I’ve seen it happen. So as you can see, the boat has to be at least big enough to carry enough equipment to multi species fish as may be required.

During tournament time and traveling the Ace Charter boat has over 40 rod/reel combos and an extensive selection of lures and tackle to meet the challenges that Lake Ontario tournament fishing may present. We are equipped to go after all of the different species of salmonids that may be present at any given time. Being caught short handed is not an option. 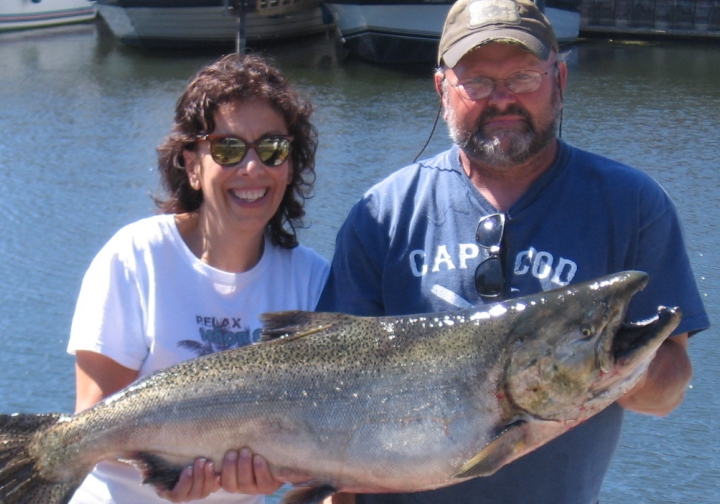 You can have the best equipment and tackle selection in the world but it really isn’t going to be useful if one doesn’t know where, when, or how to use it. This is where the second part of the triad knowledge, comes in to play. As mentioned previously, when participating in tournaments, especially far from home, competitors are required to fish for whatever fish species is readily available and that will give them the best chance at winning or placing well in the tournament. This leads to one of the most important questions one has to answer when arriving at the tournament destination and that is, “what specie(s) of fish are available in good enough numbers to go after so as to do well?” Or more simply, “what are we going to fish for?”

One of the first things that we do is to contact if any, all of the local fishermen that we know who have been fishing the port that we will be using. Local fishing reports when available can be one of the most useful sources of information when trying to formulate a successful game plan. One of the absolute best sources of information can come from the fish cleaners of the area or port. How useful do you think it would be to know what kind, what size, and how many of each different species of fish have been coming in to be cleaned? Obviously, if there are numbers of king salmon being caught then that’s what we will be going after. Keep in mind that the information being gathered has to be reliable. What is more reliable than being at the cleaning station and seeing the fish for yourself? Even if there is no one around one can still sometimes see evidence of what’s being caught as carcasses in the dumpsters can tell you a lot. 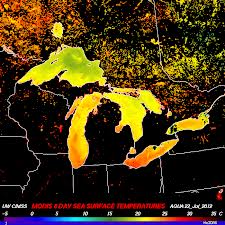 Being armed with some idea of what’s available to be caught, it would be a good idea to have a least one day to go out on the water and practice. Still, going out and catching fish in practice is no guarantee that the fishing will remain the same come tournament day! This is where “reading the water” is so important. Did the fish move? Did the wind change direction and move the water around and change the temperature? Did the primary source of forage (baitfish) disappear? These are just a few of the particulars that must be taken into account. This would be a good time to mention how useful surface temperature maps can be.

To be successful competitors have to determine what specie(s) are available, where they may be located at any given time, and through practice and past experience what should be used to catch them. Having a team with all of the members being accomplished fishermen can really help to answer and solve some of the unknowns and variables when it comes to fishing multi-species, especially at a strange port. Time on the water can be the best teacher on how to catch fish. If two heads are better than one, four or five heads can be better yet. If the fishing is tough, chances are one or more of the team members has been in this situation before and knows what to do or at least what to try. This brings to mind another point to mention. Sometimes no matter what you do you will not catch fish. Knowing that it’s time to pick up and move can be difficult at times. This makes me think of a definition of insanity I once heard: “Doing the same thing over and over again and expecting different results.”

I once heard Len Cardinale a retired International Olympic Archery coach once say, “Execution is not done. It is made to happen.” His premise is that if you set things up right and allow things to happen the way they have been previously practiced that they can be carried through to a successful conclusion. How does this apply to tournament fishing?

We can have the best equipment placed at the proper depth with the right lure for the right species deployed. If all goes well the rod will fire, someone will grab it as fast as possible and set the hook. The person who grabs the rod now has a job to do. His/her job is to fight that fish to the back of the boat with the fish in an exhausted state so that it can be netted. That is, as should be, the only responsibility of the person on the rod. The rod handler shouldn’t have to worry about moving other rods out of the way, boat speed or direction, other rods going off, etc. Those worries are the other team members’ responsibility. The rod handler’s total concentration should be on properly bringing that fish to the back of the boat. What do you think could happen if the person fighting the fish loses his concentration because he’s worried about or thinking about other things?

Prior to that rod firing things had to be set up right for execution to have a good chance to happen. The equipment and the knowledge have to be applied properly for that rod to even fire in the first place. Over the years, I have seen several mistakes in the initial set-ups that have cost our teams fish. Some of them have included improper release tensions, improper drag tensions, not using rubber bands when fishing light line, wrong positioning of the rods in the spread, and not returning lures to proper depths. All of these mistakes have happened on my boat while tournament fishing in one way or another. They have been made by some very experienced people including myself. Mistakes do happen and will happen on most boats on any given day. The more successful boats however, will make the necessary adjustments midstream to correct the mistake before it can have a detrimental effect on the outcome. Some boats including ours have a system of checks and double checks to make sure those mistakes are minimized. Everyone on the back of the boat double checks each other at one time or another.

The top performing tournament boats minimize mistakes or minimize the effects of mistakes while execution is allowed to happen. But even so, sometimes fish do things that are unexpected or out of the ordinary. We have had fish strike our long lines and then turn and charge the boat. The rod handler’s job is now to reel like hell as fast as he can to “catch up” with the fish. The driver of the boat can also help. His job is to speed the boat up to help “catch up” to the fish and stay ahead of it. Another team mate should be watching the other rods for bites. Another team mate should be watching the fish being fought and be ready to move rods out of the way. Another when the time comes should be ready for netting the fish when it comes to the back of the boat. As one might surmise, there is a lot that can and does go on when a fish strikes. Imagine having several rods go off at once?

Execution is made to happen. Through team work, equipment is deployed with knowledge to produce bites. Through experience and co-operation a team of anglers work cohesively towards a successful outcome to either place well or win a tournament. Employing past experiences as well as adapting to present conditions maximizes fish bites. If all is set-up right and concentration is exercised where it needs to be, “execution happens.” 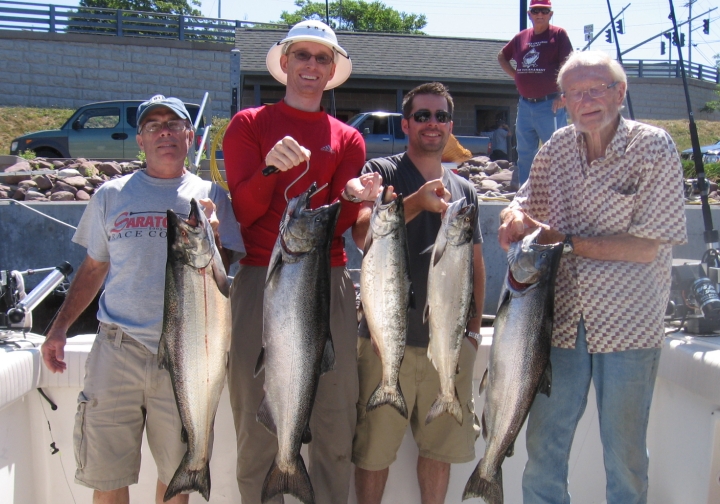