We’re are often asked what is the best month for trophy brown trout fishing on Lake Ontario out of Oswego,NY. Year after year, the answer is plain and simple. June, June, June! For over the twenty plus years of fishing Lake Ontario, we have taken more trophy size brown trout during the month of June than any other. Notice we said “trophy browns”. 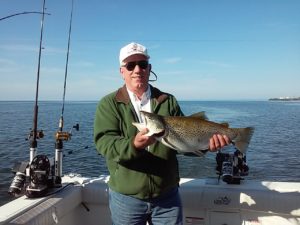 One might ask why June is typically the best month for trophy brown trout fishing and the answer is two fold. First, the water temperatures at this time of the year are warm enough to really get the big fish active. Metabolic rates increase and the bigger browns need to feed more. Secondly, alewives are in closer to shore and concentrated as they go through their yearly procreation. There will be age classes of alewives either coming in to spawn near shore and in the bays as well as those that have completed the spawning process and are returning to the lake. The water temperature also is conducive to alewive spawning and aquatic comfort.

Our definition of a trophy brown trout is one which weighs in the mid to upper teens and is at least over three years old. They are a different class of fish and require a different approach to getting them to bite. Light tackle is one of the biggest keys to getting a trophy brown to commit to the lure. Presentation of that lure is also important as well. As previously mentioned, temperature plays an important role in both metabolic rate as well as where Mr. Trophy Brown Trout might be. During the month of June, finding 58-62 degree water without going over concentrates trophy browns in the water column. Experience has shown that bigger browns like to be in this temperature zone during this time of year.