There are many boat trolling skills that increase the odds to successfully land fish while trolling Lake Ontario. Boat handling skills are often overlooked as an important ingredient to landing fish. Many anglers are just happy to get the bites and fight the fish without giving any thought to boat maneuvering and handling. We will touch on a few tricks and tips that we use during our Lake Ontario Charters.

Set the rods. Set the trolling direction. Dial in the speed. It happens! The rod fires. The angler runs to the rod, reels down without taking it out of the holder till it’s tight,removes it from the rod holder, and sets the hook. He keeps setting the hook until the king is up and running. So it begins! First king of the day on a rigger shot.

The driver of the boat has responsibilities just like the angler on the rod. His first responsibility is to keep the fish in the center behind the boat. If the fish veers to the left, then the driver needs to steer to the right to compensate for the offset. This should be standard operating procedure throughout the battle. 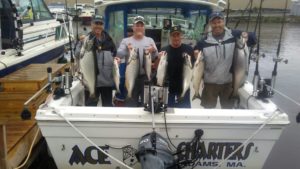 Using Speed as a Maneuver

Once the fish stops running, the angler begins the pump and reel fighting technique. Again, the driver needs to keep the fish in the center of the spread behind the boat. If the fish is exceptionally large, the driver may have to slow down so that the fish can be moved by the person on the rod towards the back of the boat.

But, what if the fish charges the boat after running?  The best move to make on a charging fish is to speed up the vessel. Be aware, however, that if you go too fast, rigger rods and releases may pop due to the excess pull created by the increase in speed. It’s a balancing act that comes with experience.  Once the fish reaches the back of the boat, it is sometimes wise to slow up the vessel just before the scoop. Slowing down makes it a bit easier for the net guy. This maneuver greatly increases the netting percentage on the first try.

Using boat speed and direction are just a few of the boat trolling skills to use when a rod goes off. Those discussed in this post were for downrigger bites. In the next post we ‘ll discuss some maneuvers  for long line bites like those of dipseys,coppers, and cores.