For those of you who have been Lake Ontario fishing for quite some time I’m sure that you have been exposed to some of the new tackle and electronics for Great Lakes fishing that have come out onto the market.Some of the electronic stuff has worked as advertised, but a lot of it hasn’t. I’ve been bit by this in the past. I think that it just really sucks that there are companies out there that will let products out onto the market knowing that they are bad and knowing that all the previous hype and PR released was just a big show of smoke and mirrors.

The more I fish and the longer I spend time on the water, the more I try to idiot proof what I do to catch fish. I try less and less to rely on pricey electronics for great lakes fishing to do my fish thinking for me. Do I use a fishfinder?  Yes I do, but not so much to just find fish. A lot of times I use it more for depth control. Do I use a chartplotter? Yes I do and I probably rely more upon it than I do my fishfinder. Could I effectively fish without them? Yeah I could, but I so do rely upon them more from habit than anything else. 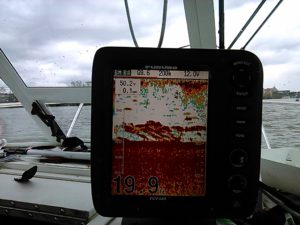 Last year I learned just how much I was relying on my chartplotter, and not by choice! It seems that the crystals that are present inside the gps antenna mounted on top of my boat are susceptible to lightning strikes. These lightning strikes don’t have to be direct hits, either which they weren’t. While I was waiting for a replacement antenna to show up in the mail, I had several charters to run. I could not believe how many times I would actually look up at my roof mounted chartplotter for information that just wasn’t there. I mean i just kept looking and looking.It was a habit driven behavior. Did we catch fish? Yes we did! We caught fish like we always did but now I had to triangulate my positions and use depth information to retrace my previous paths to go over active fish.

Now there are new items coming out on the market that will tell you how deep,how fast, and in what temperature your lures are running.They are expensive! Do you really need them? The answer is no! There are ways to figure out whats going on below without having any fancy electronics for great lakes fishing equipment on board. I touched upon some of the methods that we use to determine what’s going on down below in an article in my informational section called “Do you know where your stuff is running“.

Through the use of underwater cameras I have seen down speed and temp units lie to me. We were once running a dodger fly presentation down 90ft in the column heading west. Our bottom speed being sent up from the probe said we were going 3mph which was a common speed that we used back then. My gps speed over ground was showing that we were going 4mph (to get the 3mph down below), but guess what the dodger was doing? It was just sitting there. Because of the underwater currents running perpendicular to our trolling direction we had to carry over 5mph on top to get those dodgers to roll on the camera in real time. We also noticed that the bend in the dipsey rods became more normal in appearance as we got the dodgers to roll.

The point of all this is that although there are expensive electronics for great lakes fishing and gadgets coming out on the market all the time, when it comes right down to it we can determine what’s happening without the use of them. Remember, some of the electronics out there are expensive and don’t work really well in the first place. Also remember that if you are relying on electronics and you will, you should have a manual way of keeping everything honest. Beware!!  Lightning strikes!