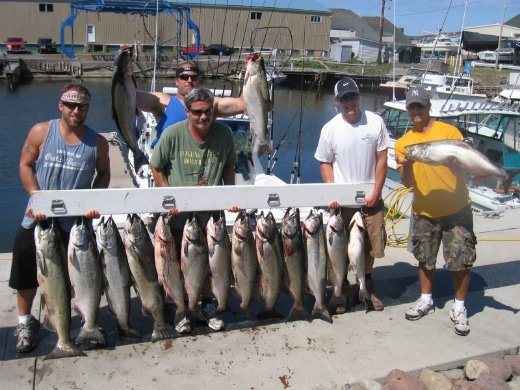 Fishing offshore breaks on an early season  Lake Ontario charter can be one of the best ways to fill a cooler with trout and salmon if you know what to look for and how to find it. In this segment we’ll talk about what an offshore break is and just how we go about finding and fishing it.It can be a very deadly technique! 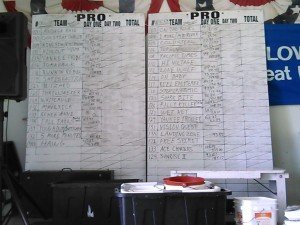 Fishing Offshore breaks gave us the lead on day one.

In the early spring or when there has been an exceptionally cold winter like the one in 2014 where part of the Lake had actually frozen over, there will exist a very large mass of colder water which makes its way to the surface from the bottom of the Lake where it existed in its most densest form at a temperature of 39.5 degrees. There will also be big pockets of colder water that originated from the melting of the ice that was floating on the surface at or less than 32 degrees which is its least densest form, the reason why it floats. In either event, there will a huge mass of colder water somewhere on the surface during the early season creating  large fishable offshore breaks.

Do you have a surface temperature apparatus on your boat? If you don’t, then I highly recommend that you get one if you would like to try fishing offshore breaks in the early season. What we will typically do on the start of one of our fishing trips is to point the boat north west and head out towards the middle of the Lake. On our charter boat the “Ace“, we use the Fishhawk X4D which has a surface temperature gauge.

We also have a surface temperature gauge built into our Furuno FCV 585 fishfinder as well.

. What we are hoping to see, is a huge drop in the temperature where the warmer water drops off into the ice. Last year, even as late as the third week in June, we found the surface break out over 500 ft of water.

We were fishing offshore breaks on a daily basis . The fish were there. We caught all species of trout and salmon out on the the break, albeit, the warmer side. That break was so sharp that it acted like a wall that the fish did not want to cross. We had 48 degree water on the warm side and 38 degree water on the colder side in certain spots. Because the temperature was so high up in the column, planer boards both inline, we use Church walleye boards, and Otter boats were deployed simultaneously. Some days the big boards were hot and other days the inlines were the ticket. One things for sure, on any given day, the fish would tell you which boards to use within an hour or so when they started biting.

Stickbaits and spoons were the best items for us. Fishing that high up in the water column, we also leadered down to 8 lb test and even dropped to 6 lb when there were steelies around. Long leads off of the downriggers with fixed sliders were very productive on most days. Two and three color segmented lead cores were absolutely devastating on most days as well. The trick to all of this was to determine what species were holding on the break that outing and then loading up on the items that they were biting. If there were steelies, small stinger spoons,  super slims, and Jr. Thundersticks got the nod. Lake trout were all over the stingers and stingrays. Kings when they were around,were crushing stinger and stingray spoons both in glow and standard finishes.