Ever wonder how some boats keep getting multiple hook ups like doubles, triples and quads? There are a few things you can do to increase the chances of this happening for you. But, be advised there is no one size fits all approach to making this happen. We will look at a few different scenarios, and as always, try to figure out why its happening.

There will be days when you’re out fishing and you just can’t do anything wrong. You pull back the throttle and land on the fish. Rods start popping two, three, four at a time, or more and all is wonderful. But why did this really just happen? Why were you really getting multiple hook ups? These are the kind of days to remember and if you fish long enough , you will have them.

As the season progresses, these occurrences occur less and less, unless, you actually try to do something about it, which you can. Every day there will be less and less fish to catch. It’s just simple mathematics! Fish are getting caught everyday which leaves less fish to be harvested. So how do we get back to getting multiple hook ups like earlier in the season when the fish were more plentiful and chewing? 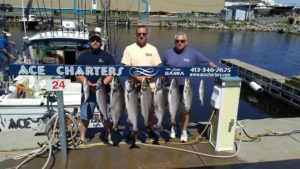 In a previous post we talked about using the right presentation with speed, direction, and temperature. Most of us have our pet items that we like to run based upon the conditions we are faced with. If one of the items in the spread fires multiple times, we will try to duplicate it in the spread in another position. We usually choose a position as far away from the item that’s firing as possible. This will tell us one of two things. It could be that the position the item is in is why it’s firing or the fish are showing a preference for that particular item on that day. If its the latter, we will keep adding that item to the spread. If they quit biting it, we start pulling them back out in reverse order.

Another handy trick is to chase the depths of the riggers or divers that are firing. We usually spread our riggers about ten feet apart in the column on initial set up. So, if a rigger down 90 ft fires, within a few seconds we to will drop or raise the other rigger to 90 ft depending where it was initially. Same thing with the divers. If we have a diver firing at 275 ft out, we match the other diver to it. This increases the chances for getting multiple hook ups more often than not.

Let The Fish Tell You

If you pay attention, on most days the fish will tell you what they want and how they want it. It’s our job as fishermen to figure it out! As the season wears on, whats left for fish become more challenging to catch. There’s less of them. By using some of the techniques outlined above, getting multiple hook ups on Lake Ontario will happen much more often!