Lake Ontario 2016 season  ended and is now in the books. It will go down as one of the most challenging seasons for numbers but one of the best seasons for trophy fish in both the king salmon and steelhead categories. We also managed to capture a few decent size lake trout and a brown trout or two as well.

The season started out with little to no brown trout fishing opportunities to be had. The winds and water temperatures created  some of the absolute worse brown trout fishing conditions that we have seen in over thirty years of fishing for brown trout during the month of June. We did however, have the option to fish for bottom hugging lake trout which we did. On most days good numbers were available along with some very nice specimens that were brought to the net. 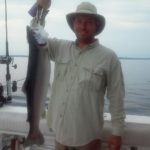 It isn’t often that steelhead in excess of 17 lbs are harvested as like the one in the photo above. It was harvested on light tackle with a spoon. 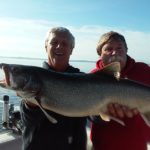 Lake trout were readily available when there were no brown trout to go after including the laker above which weighed in the teens. 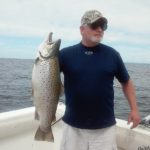 What was really funny was that this nice sized mid teen brown trout was taken when we were trolling for king salmon.Go figure!

Bittersweet top award goes to Justin Furbush from Maine for boating this 34 plus pound monster king salmon on an afternoon trip with us. Wish that Justin was in the fall LOC  Derby as this fish most undoubtedly would have taken top honors netting him over $25000.00 in prize money. 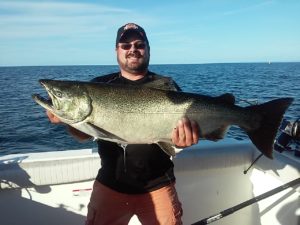