Lake Ontario brown trout fishing out of Oswego, NY can and is a savior at times for our charter fishing adventures especially from June all the way through the rest of the summer. There will be days when salmon and other species such as steelhead will not be readily available to catch. High winds or the wrong temperature profile cause this to happen. This is where brown trout fishing on Lake Ontario can really shine. 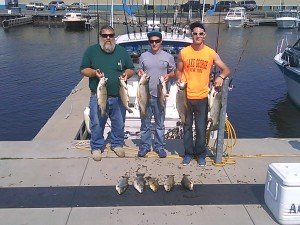 Lake Ontario brown trout, by nature, inhabit the waters that are often more closer to shore than other species. Browns can typically be found over depths of  10 to 120 ft of water during the month of June. Brown trout are also predictable. Browns are found where 55 degree water intersects with the bottom of the Lake. For example, if you put your temperature probe down (we use an X4D) and find  55 degree water down 70ft in the column, then we can usually expect the browns to be stretched horizontally along the shoreline in 70 ft of water at or near the bottom near this 70 ft contour.

Now that we know where to look to start our Lake Ontario brown trout fishing excursion, we then must choose which lines and apparatus to use to effectively put our lures at the correct depth. Here’s lies one of the biggest secrets to catching brown trout on Lake Ontario and that is putting your spread out so that it covers from 55 degrees to as high as 68 or even seventy degree water. That’s right! Even though you will see the browns scattered along the bottom at the 55 degree intersect, the active browns will usually be higher up in the water column in the warmer water.We have caught some of our biggest brown trout in 70 degree water on lead cores off of in-line planer boards  during the dead of summer.

So what lures should you use when Lake Ontario brown trout fishing? The answer is,”that it depends”. Let me try to help narrow it down a little bit for you. Earlier in the season as well as earlier in the morning when the light is low, stick baits such as Smithwicks,Rapalas,  and Thundersticks get the nod, especially off of the high lines either flat chutes or in-lines. The rest of the time we are most likely to be running spoons. Here, items like Michigan Stingers and R&R spoons will get deployed.

One of the other secrets to be successful in catching Lake Ontario brownies is trolling at the right speed. This can vary as the season wears on. Typical trolling speed is 1.8mph downspeed . There are days when this will vary. Watching how the fish react towards your spread when on turns can give you clues as to what speed you should be pulling for that day.If the fish are hitting on the inside of your turns, that’s a pretty good indication that speed should be lowered as the fish are hitting on the drop as the lure is slowing down.

Another often overlooked key to Lake Ontario brown trout fishing success is knowing when to leader down on your presentations. When the temperature is up in the column and the water is clear, leadering down in line diameter makes a difference. Whether you will catch fish or not depends on this. There have been times when we are fishing tournaments that we have leadered down to 6 lb test to get bites on pressured fish in clear water. It does take some rod handling skills to battle and land these brownies on the lite line. Patience and steady pressure will get the job done in good fashion.  One of the nicest things about Lake Ontario brown trout fishing is that it makes for great sport for women and children, especially when running lite tackle. 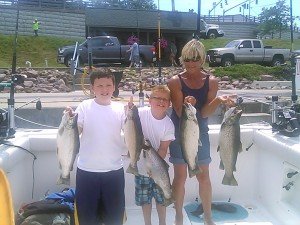 Lake Ontario brown trout fishing family fun when everyone gets in on the action.

It is not uncommon to catch brownies in the mid to upper teens during one of our charters. And with the lite line we use, it can take quite a while to battle the fish to net. With the equipment that we use on our charter boat the “Ace”, women and children as well as those that are physically challenged can have the time of their lives catching big browns. Also keep in mind that most days the browns can be quite active. Lots of action on the boat is not uncommon. When you have the right stuff down, multiple hook-ups at the same time are inevitable.

Some of my favorite times on the water on Lake Ontario are spent brown trout fishing with families. Women and children enjoy it. It’s an absolute blast to watch the excitement that is generated when several rods go off at once. Then, the fire drill in back of the boat ensues. There are anglers in back of the boat up against the transom doing simultaneous battle with brownies hooked on the other end of their lines. Clients shuffling back and forth to keep the lines straight is also exciting to watch and experience. The smiles on their faces when the fish are netted and brought on to the deck of the “Ace II”  says it all.  Give us a call at 413-346-7675 or check out our Ace Charters website for further information.