Lake Ontario Fishing During the Week

Lake Ontario fishing during the week is my favorite time to chase trophy trout and salmon out on the “BIG POND“. The biggest reason ,of course, is that there is less boat traffic. There will be other boats out fishing but experience has shown that week day fishermen are much more easier to fish around and communicate with. We start fishing the Lake in early June and continue on into the middle of September. 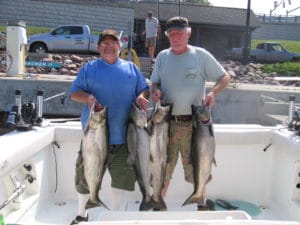 Starting in June, the boat traffic is much less than later in the season. Even the weekends are not quite as filled with “weekend warriors” or part time charter boats like later in the season. This is one reason why trophy brown trout fishing can be so successful. Brown trout, especially the big ones, are typically a bit higher in the water column this time of year. They do not tolerate heavy boat traffic and understandably so. Boat motor noise and numerous downriggers and wire divers whizzing by them is a big big turnoff.

I like July fishing perhaps the most. Lake Ontario fishing during the week for Brown trout as well as King Salmon, Steelhead and Lakers is available . When the weather permits, offshore fishing in deep water for kings and steelhead can be rewarding. The nice thing about being offshore is that you can run full spread programs of eight rods or more. The area is much more vast so that most times you will not even see another boat. This allows us to turn and pivot on biting fish. Multiple hook-ups are quite common when you can immediately turn on the fish. These types of maneuvers are almost impossible in heavy boat traffic.

When a big king strikes a long line such as a 500 or 600 ft copper set-up, we can turn on the fish as we fight it. This allows us to stay in the area where the last bite occurred increasing our chances to get bit again. It does however, require room to turn and maneuver. In heavy boat traffic this is next to impossible. Under crowded conditions, we have to keep the boat going in a somewhat straight line to keep the fish in back of the boat. Usually by the time the fish is landed, sometimes as much as a half hour later, the boat can be over a mile away from the initial strike location.

As time gets closer to spawning season, the salmon begin to congregate or stage just offshore from the river mouths of their prenatal streams. Both experienced and inexperienced anglers know this. Ad to it that the fall LOC derby gets into full swing and you have the makings for a much more crowded lake. Even the weekdays get much more traffic than earlier in the season. The weekend warriors are in full swing.

Crowded conditions makes for stressful fishing. All one has to do is listen to the VHF radio. There will be guys fighting and yelling profanities back and forth at each other. The problem is that when someone sees a fish being caught, they immediately converge on that area and the boat that’s hooked up. Unfortunately, its quite common for lines to get run over and hooked up fish to be cut off and lost by non courteous boats.

Keep in mind that fish have fins and do swim. In fact, king salmon can swim over 30 mph. Just because someone hooks up, it doesn’t mean that that’s the only place where there are fish to be caught. It is courteous to give the back of boats that are hooked up some space so they can fight the fish successfully. There will be fish off to the sides of hooked up boats that will bite. It seems to me that fishermen should treat other fishermen the way they would like to be treated. Think about it. You could hook up, be fighting a fish, and want the area behind your boat open and unimpeded to fight that fish. Wouldn’t you?

Lake Ontario fishing during the week definitely has its advantages. Less boat traffic and dealing with more experienced boaters is plus. Here at Ace Charters, we fish up to seven days a week when the weather permits during the season. Whenever possible it is our goal to stay away from other boats. The fishing is just plain better and much more enjoyable. We do however work with some of the other charter boats on a near daily basis. This gives us as well as them the opportunity to put our clients on the fish, especially on those tougher days.