This will be the final Lake Ontario Tournament report for Ace Charters and 2014. Once again our Ace Charters professional team managed to do quite well finishing 4th in the Oswego leg of the Lake Ontario Pro-Am series, a two day tournament. On day one we managed a 12 fish limit but once again, day two was a lot tougher for the entire field including us. 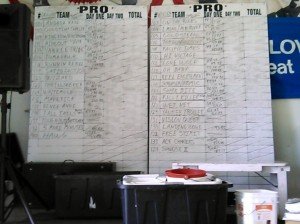 Continuing on with the Lake Ontario report brings us to the Sodus leg of the Pro-Am series turned out to be quite a disaster for our team. On day one, we only boxed nine fish with one king salmon and the rest brown trout. What was most disappointing was that we dropped five kings first thing in the morning. On day two, we let the thought of how other teams were doing get the best of us. We in fact, broke one of the Cardinal rules of fishing,”never leave fish to find fish”! We made a team decision to run some 25 plus miles back to our home port of Oswego to go for a home run thinking we could box 12 kings. We had received reports that evening that the fishing was good there.

Running 25 miles and burning up  over 2.5hrs of potential fishing time turned out to be the worst decision we had made since the inception of the team. We did not even come close to boxing out with kings and even struggled to catch brown trout which we were able to catch the day before in Sodus. We finished out of the money and whats even more disturbing, we broke a four year streak of always finishing well enough to cash in every tournament that we had competed in! Oh well! I guess hindsight is always “twenty twenty”!

The Lake Wide Cup once again seemed to elude us as if it’s never meant to be. Last year as those of you who have been following us know, we finished second overall in the Lake Ontario Lake Wide Cup championship falling hard luck to teams with fish not weighing in on day two. The scoring for the Lake Cup is very similar to NASCAR and is based upon how you perform each day as well as bonus points for overall placement.

This year there was a new twist in our race for the cup that kept us out of first place once again and we felt that we had to include this in this Lake Ontario tournament report.The way that the rules read was that teams had to compete in at least one of the west end tournaments, either The Wilson Invitational or The Oak Orchard Open. You would think that with this requirement, that at least one of the scores from the west end would have to be counted. Well!!! Not So!! Our team found this impossible to believe but so was the case. I’m not taking anything away from Team Screamer who ended up winning the cup, but if one of the West end scores had to be counted for the LAKE WIDE CUP not the whichever end of the Lake you felt like Cup, then our Ace Charters pro team would have not only won the cup, but also had it locked after the Oswego Pro-Am. ONCE AGAIN WE FOUND OURSELVES FINISHING SECOND OVERALL FOR THE LAKE WIDE CUP.

You can read about our new policy concerning fishing future tournaments at   Lake Ontario Charter Boat Captain    If you scroll down you will see it highlighted in red font.