Reflections on Lake Ontario Fishing August 2016 finds us moving into the anticipation of King salmon staging off of the mouth of the Oswego River as spawning time draws near. The word challenging once again rears its ugly head along with the occasional blow off greeting us on any given day. Similar to July fishing, August 2016 began as more of the same but with a twist. Mother nature and the urge to spawn was gaining ground and increasing its influence on the King and Coho salmon. Temperature was becoming less of a factor as August progressed.

The first half of August was much like the end of July. Temperature was important and one of the biggest factors in determining where the kings would be on any given day. This influenced not only how deep of water the fish would be swimming over but also how deep in the water column they would be. Using the X4D was once again paramount in dialing in the ideal depth to fish for both kings and cohos. The preferred baits and presentations were also changing,too!

Big paddles with John King cutbait heads got the nod first thing in the morning under low light conditions and when the water temps were only 50 to 60 ft. down in the column. We would run a combination of both attractor flies, Atommiks of course, along with Michigan Stinger spoons and paddles with cutbait. How the dawn broke in the morning along with how the fish were biting would determine when we would change things around. Boat traffic began to have a bigger influence,too!

As August wore on, tactics were adapted to the fish’s preference. Let me explain. Over the years and sharing information with fellow anglers like Big Finn Gene and Gene as well as the late, great Brian Castle from the Sea Devil boat, we employed the “less is more” method. One of the mainstays of this approach was to only run two downriggers. The probe rigger was set to run in temperature. The second rigger was started off high in the column out of temperature, especially if when marking high fish on the finder. The second rigger was then used to chase  marks as they appeared deeper on the fishfinder as it got brighter out. Believe it or not, at times, we were marking and taking early morning fish in 70 degree water.

Once the sun got up on the brighter days the second rigger was fished ten feet below the probe rigger or if we were in shallower water, five feet off the bottom. Here’s a little trick we use to know  exactly how far off of the bottom we want to be.We call it fishing from the bottom up. The rigger is allowed to descend until it hits the bottom and then is brought up five feet as measured on the counter on the rigger. It needs to be done quickly so that you don’t hang bottom. It also needs to be monitored frequently to keep it in the zone. The zone we look for is where 44 degrees intersects with the bottom. It helps to have a good chart plotter and fishfinder to do this consistently.

Reflections on Lake Ontario Fishing August 2016 brings us to the end of a very challenging season. There were some very nice fish caught in August especially during the fall LOC derby. Congratulations to Chad Gherig for winning this years fall LOC. Also congratulations to first place winner Lynn Thomson Jr. who while fishing Paul Powers aboard the “Ruka” landed the 1st place fish netting a cool $5000.00. Lynn’s fish was just ounces shy of Chad’s grand prize winner. Pauly and Lynn are past members of our Ace Charters professional fishing team. They are accomplished anglers and are as good or better than anyone else on the lake. I’m very proud of these boys!

One of the all time Reflections on Lake Ontario fishing August 2016 that will always be remembered is the 34 lb plus king that Derek Furbush landed with us during the fall LOC in August. Unfortunately for us, he was not entered in the derby. It was caught the day before Lynn Thomson caught his. Derek’s’s King salmon most certainly would have been in the money. 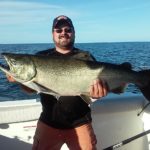 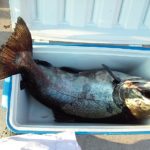 Please check out some of our related posts below: