Reflections on Lake Ontario fishing July 2016 include another month of adapting to ever changing conditions. July 2016 was one of the hottest months on record with ambient air temperatures averaging 10-15 degrees above normal, but with one exception. There was wind! The winds were strong enough to keep us off the water. Wave heights were just too high and dangerous to allow us out on too many occasions. Small craft advisories were a common occurrence.It was very unusual to see high winds along with scorching hot temperatures in the air. Usually in Oswego, the exact opposite is true with flat calm seas and no wind on those hot scorching days. So how did this affect the fishing?

On any given day that we could get out to fish, the target water temperatures which are species specific could be anywhere in the water column. What this meant was that you had to be prepared to fish anywhere from near the surface to over a 150 ft down in the water column. Even being able to anticipate where in the water column the target temperatures should be based upon past limnological behaviors couldn’t be relied upon. We literally had to go out and put the probe down to see where the temperatures were and then fish accordingly. We were faced with this on almost a daily basis when we could get out on the lake to fish. 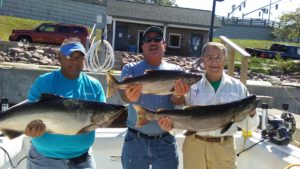 Reflections on Lake Ontario fishing July 2016 showed that temperature locations not only dictated where we would fish but also what we would fish for. When we were iced out one morning after a west blow(which normally pushes the water temperatures down deeper), we found ourselves fishing for king salmon with only 60-70 ft of wire out and riggers down 20-30 ft. This actually worked for the first hour or two depending on the cloud cover. Once it got bright out we switched over to Lakers out in the deeper water. This pattern worked for a while until the winds blew and changed everything around again!

When the temperatures did get pushed down, we managed some nice catches of silvers. Atommik flies with pro troll e-chips did most of the damage. One of the keys to making the flies work was dialing in the right speed for that given day. Believe it or not, speed seemed more critical this past season than ever before. Some days we were pulling 1.8 mph down speed on our Fish Hawk X4D while other days saw down speeds of 2.6 mph to trigger strikes. When we found the temps up a bit in the column, Silver Streak and Michigan Stinger spoons in the stingray size on coppers were hot. Spoons with yellow in them such as Stingray yellow killers had their moments. 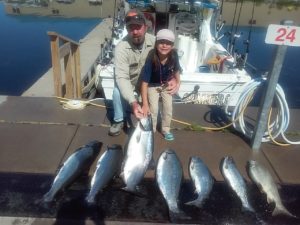 As you can see in our  reflections of Lake Ontario fishing July 2016, one had to be prepared to fish from top to bottom and couldn’t take anything for granted on our way out to the lake. Knowing where the temperature was in the water column was key. Next blog post will look at August and what we faced while fishing it.