Running spoons on Lake Ontario during one of our Lake Ontario fishing charters definitely has its time and place. It has produced fish for us when no other applications will. In this post, I will discuss the times and places where running spoons on Lake Ontario, especially out of Oswego, NY, is key to putting fish in the boat. I will also discuss presentation criteria that we use on our charters when employing spoons while trolling. This past year, our two biggest Kings came off of spoon presentations, both weighing 34 and 36 lbs. respectively!

I belong to the school of lite line trolling while running spoons on Lake Ontario and believe in using the lightest line possible to get the job done. Line diameter is key in generating bites and the smaller the diameter the better, to a point. If you use too lite of a line, you increase the risks of breaking off the fish. For our rigger applications, we run 15 lb. Berkley Big Game clear  leadered down to 10-15 lb test Ande fluorocarbon. Our slider and cheaters employ 10-15 lb Ande flouro. On our copper and diver set-ups, we run 20 lb test Ande flouro. The other important part of the set-up is the swivel and in our case we run a plain 50 lb. Spro power swivel to the leader and a #2 dual lock snap on the business end of the flouro on our riggers. On our divers, we run a 50lb. Sampo barrel swivel with a dual lock snap! 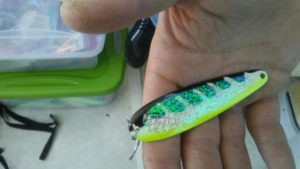 One of our favorite salmon spoons from Carl Sherman

Our favorite time to be running spoons on Lake Ontario is when the temperature in the column is eighty feet or less. The higher in the column the temperature , the lighter we leader down to. We have also taken kings on spoons deeper than 80 ft and much shallower than one would think. Consider this! In the past, we have caught king salmon as shallow as on a free slider on a rigger down 15 ft. During the spring Scotty King of The Lake Tourney out of St. Catherines , we did just this! This shallow water king took top honors for the biggest fish of the weekend long event weighing in at 25 lbs. 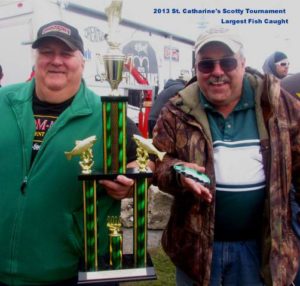 Another favorite time to run spoons is when we are having a hard time keeping our lines straight while running attractors due to crabbing and currents. Spoons are much more forgiving when lines are crabbing off to the side of your line of travel. They seem to generate more bites under these conditions vs. running attractors with meat or flies. Along with crabbing, rough seas also lend themselves to a better presentation with spoons. Variations in speed, and up and down motion due to wave action can impart favorable action to the spoons. Spoons are also much more speed tolerant than attractors when it’s hard to keep speed.

Last but not least, there have been days when the fish just want spoons instead of attractors for no other apparent reason. During days when our go to items are not producing, changing over to spoons has saved the day. Most of the time, we have at least one spoon put out in our spread, anyways. If it starts going, we add additional spoons into the spread. Starting from the outside in is our go to method for adding items that are getting bit.  Adding another spoon as far away from the spoon that’s getting bit will tell you if the fish do, in fact, want spoons over your other items, or if it’s just the position that the spoon is running in that’s creating the bites.

Running spoons on Lake Ontario have their time and place when trolling for king salmon. Having the right size and color spoons in your spread and in the right location(s) can and do generate bites. Knowing when to run certain size and color spoons changes during the season. That sounds like a good topic for a later post. You may also like to check out  “Chasin The Radio” and “Best Time To Fish lake Ontario For Trout And Salmon”!