The Year of the Thirty Pounders On Lake Ontario

This past season, 2013, was the year for thirty pound Lake Ontario king salmon and  was the best ever for Ace Charters’ anglers while charter fishing Lake Ontario with us. Our clients successfully battled and landed nine king salmon that tipped the scales at thirty pounds or better with the biggest near 34lbs. All of these fish were weighed on our Boga Grip which is surprisingly accurate. It is the same weighing apparatus that we use while tournament fishing and determining the weights of the fish we catch. All the fish in the pictures included in this Lake Ontario fishing report were weighed on this scale.

Looking back on this past fishing season, I was reflecting on how these better than thirty pound Lake Ontario king salmon were caught, looking for the common denominator that got these fish to bite. Remarkably, other than fishing on Lake Ontario, there really wasn’t any one factor that stood out. The fish were caught on a variety of different set-ups including rigger rods, dipsey divers, and coppers. If I had to give a nod to the set-up that caught the most, it would have to be the rigger rods. The other most popular part of the equation was attractors and Atomik trolling flies.

There was no one particular attractor style or color that stood out in catching these fish. Some were caught on Pro troll e-chips and others were caught on Spindoctor attractors. The fish that were caught while using flies were all caught on Atomiks but with different colors and bead patterns. A few of them were also caught on either meat or spoons, too! There just wasn’t “just put this lure down and you’ll catch all the thirty pounders you want” kind of lure or apparatus to catch these fish.

Even the speeds that these fish were caught at while trolling were not all the same. Some fish were caught trolling slowly and others were taken while trolling faster. Looking back, I can say this. Most of the thirties were caught during the month of August out of the port of Oswego, NY. Yet, there were a few also caught in July. Even the age class and gender of the successful anglers who bagged these trophy fish were all different ranging from 8 yrs old and up including girls and guys.

Stay tuned as I will be writing more on this subject as I think about this and give it some more thought and as always, you can read more about our fishing techniques at www.acecharters.com 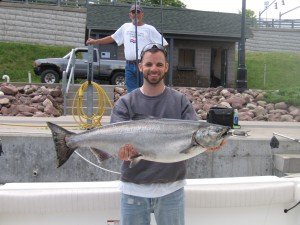 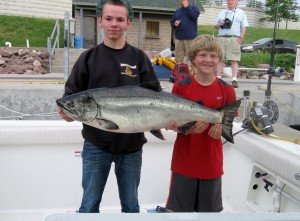 Even the youngsters got in on the Tyee action! 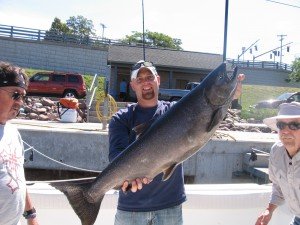 Our biggest fish of the season in 2013 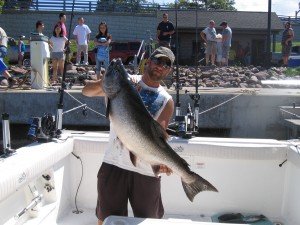 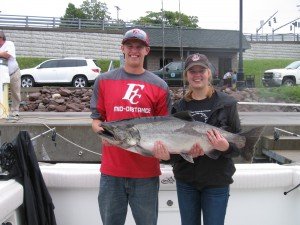 The girls beat the guys. 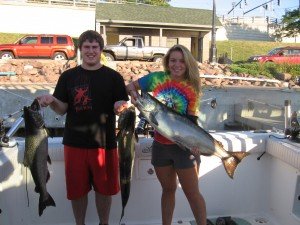 A great date to take a girl on.

Dave from Maine caught this monster with his dad. 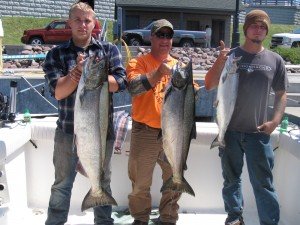