Using the Fishfinder Zoom feature is an often overlooked feature available on most fishfinders today. It is a function that helps dial you in on fish and helps you to keep your baits in the strike zone. We will discuss in this post the why and when you should use it during your fishing excursions.

To help understand the why of using the fishfinder zoom, it helps to understand a little bit about how fishfinders work. Specifically, pixels!  The fishfinder display is made up of pixels, laid out both horizontally and vertically. My Furuno FCV 585, for instance, has a resolution made up of 640 vertical  x 480 horizontal pixels. Each pixel displays a segment of information from the transducer on the screen. The more pixels, the higher resolution or more information displayed. 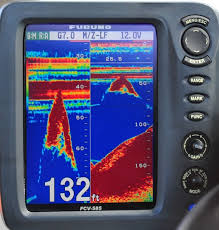 Splitting The Screen For Better Resolution

The more depth the echos are spread out over, the less distinct the information becomes. This by definition, means the less we can see on the fishfinder the deeper we go. Experience shows that when targeting fish high in the water column over deep water,such as steelhead, fish will not show up on the graph with normal top to bottom settings. (without zooming in) ! This leads us to the when we should use the fishfinder zoom function.

It is possible on most fishfinders like my Furuno, to split the screen and use the zoom function. Splitting the screen and boxing up a specific depth portion of the column allows half the pixels to cover and display whats in the zoom window. 153,600 pixels of resolution are  used to display the echos in split screen mode on one side. Remember, more resolution equals more definition.

In a typical steelhead scenario,  iron heads are targeted suspended 10-50 ft down in the column over 600 ft of water. In full screen mode you would never see these fish. There simply aren’t enough pixels available to accurately display them. Now if you set your unit into split screen and zoomed in on the top fifty feet, there would be 153,600 pixels available to display these fish. Mathematically, 153,600 pixels/50 ft = 3072 pixels/ft resolution. Contrarily, 307200/600 = 512 pixels/ft resolution for the full screen.

As you can see , there is over 6 times more resolution by zooming in. You can see 6 times more clearly and better by zooming in and using the fishfinder Zoom feature! Zooming in also is quite effective whenever you’re over deeper water and want to see more clearly what’s going on in the strike zone. This is the essence of using the zoom feature for suspended or near surface fish.