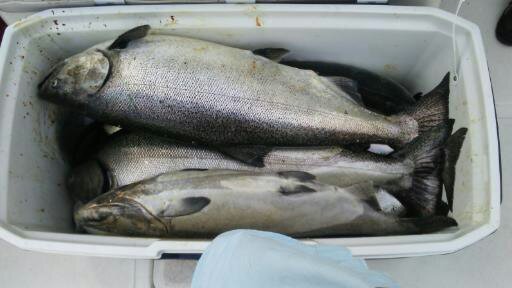 When using your fishfinder fishing on Lake Ontario there are nuances that will make your outing more successful. A recent discussion on Lake Ontario Southshore fishing reports prompted me to write this article. It all started with someone inquiring about purchasing the Fishhawk X4D or just the X4. It created a lengthily discussion with many participants.

The gist of it was that you didn’t need to know the actual depth of your downriggers because you can just “mark them on your fishfinder to see where the’re at”. Nothing could be further from the truth, especially when the boat is moving. As discussed in the Southshore report, it was pointed out that fishfinder transducers put out  sonar signals in the form of  cone angles. These angles vary with increases and decreases in depth. This alone affects where marks appear on the fishfinder. It works this way! 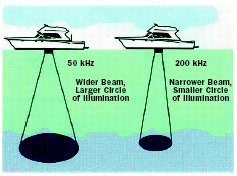 Thru Hull Transducers Have a Greater Affect on Accuracy

Those of us with through hull transducers have to take into account the distance from the transducer to the transom of the boat. Or more specifically, the distance between the downriggers and the transducer placement. This factor alone will determine some of the error which will be inherent in the fishfinder presentation. On our charter boat the “Ace”, our riggers show 9 ft. deeper on the display than where they actually are. This coincides with the transducer being 9 ft. forward of stern on my vessel.

Downrigger blow back, due to depth and speed, can exacerbate the problem. The transducer by design is going to mark the objects  and display those that are farthest away from the transducer. It will also mark and display those objects that are directly in the center of the cone angle,too! Displayed on the graph are straight line distances of echos whether angular and /or perpendicular . Remember, the hypotenuse of the cone angle is longer and will display deeper.

So how would one determine just how far your fishfinder will be off for your application? It is possible using trigonometry to determine these values along with some basic math. Read, “Do You Know Where Your Stuff is Running?”  For the mathematically challenged and those who don’t wish to constantly recalculate figures, the Fishhawk X4D will do this for you in virtually real time.

Here are a few related articles to consider:

Using The X4D on Lake Ontario