Ace Charters » Fishing Info and Tips For Lake Ontario and Hudson River » How to Keep Those Waterfleas Off!

Waterfleas were first discovered in Lake Ontario in 1982 after hitchhiking a ride in the ballast water of Russian tankers traveling to the Great Lakes. One of the many invasive species to be discovered in the Great Lakes including Lake Ontario, waterfleas are here to stay. In fact, there are two different known species presently inhabiting Lake Ontario. One is called the Spiny Waterflea and the other is called the Fishhook Waterflea.

Spiny Waterfleas were the first to arrive via ballast water in the early eighties. The adults range from 1/4 to 5/8 inch long. Spiny waterflea have a single long tail with small spines along its length. Here is a picture of them:

When anglers aren’t carefully prepared they can look like this on their fishing line.

As if they are not bad enough, there is also another species of water flea called the Fishhook Waterflea and it can cause the same kinds of problems. They were first identified by Canadian scientists in  1998, and were reported via Internet by Dr. Hugh MacIsaac.

When the Lake Ontario stratifies and a thermocline sets up the water fleas flourish and forms layers in the water column. To an unsuspecting troller who is not set up properly this can spell disaster. As seen in the photo above, water fleas can begin to accumulate on fishing lines especially the lines that are attached to downriggers and trolled through the water in a vertical fashion. It is not uncommon for an improper set up to accumulate over ten to fifteen feet of waterfleas. They look like “whale snot” all over the line. When this is allowed to happen it can become near impossible to reel the line in passed the affected area. This spells disaster when there is fish on the other end, especially a king salmon.

I have seen several different companies try to solve this problem either with special tools or specially designed fishing line. Do they work? I guess you would have to ask someone who has personally used them. As for me I have not. What I can tell you is that for the most part they will accumulate on your vertical lines. But, when they get real bad during the peak of the bloom, they will also gather on dipsey set ups, too. So, what’s a fisherman to do?

We have found that the best way to combat waterfleas is to not let them gather on your line in the first place. When we run our dipsey lines during flea season, we run 30lb wire or more. Although it doesn’t cut down on them completely, it does help some. Note that we normally run 20lb wires to begin the salmon season and these can become absolutely covered with the little buggers. The lines become so coated with them that the wire lines actually lift (float) up in the water column and will not run at the desired depth.

By now you might be wondering what the cure to this dilemma might be. The answer is really quite simple. It has to do with the diameter of the fishing line that you are using. The waterfleas have little pinchers that grab on to the line and hold on to it. More and more fleas grab onto the line and to themselves as the lines are pulled through the water. Interestingly, several years ago the answer was to run 30lb test line which was thick enough to keep the fleas from getting their pinchers around it to hold on. It worked for a while but eventually the fleas began to hold on and gather again. We then switched to 40lb test and the problem went away. The diameter of the 40lb test that we run is large enough in diameter to prevent the fleas from grabbing hold. The absolute best line we have found to do the job is 40lb Ande clear monofilament. The uniform diameter of the Ande doesn’t allow the fleas to find a place to grab hold to. It’s also available in bulk spools at a very affordable price.

Given the cost of tackle these days losing tackle to break offs and line failure is costly and undesirable. The abrasion resistance of Ande’s 40lb mono is legendary. It stands up to the abuses that releases put it through day after day. We have even had green fish wrap lines around wire downrigger cable and not break off when using the 40lb Ande. Also note that when the fleas are around, the salmon seem to be suspended deep in deeper water. The heavier pound test line does not seem to spook the fish at all. We still get the bites!

Mother Nature can and does throw us a lot of curve balls from time to time; waterfleas being one of them. But, running charters and treating clients to an unforgettable time is of the utmost importance. To do so, sometimes we have to overcome some of Mother Nature’s inconveniences. Using the right tackle can do just that! It allows us to get the job done and done right, making for many happy clients. 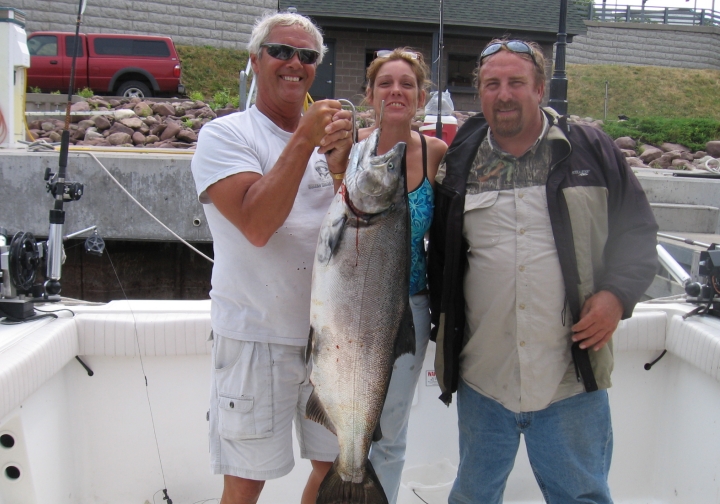