Many times customers want to see what the previous seasons were like during the spring Hudson River striper fishing season. We have archived our fishing reports into journal form so that we could save them.

4/27/2012     If you don’t know it by now, there are fish in the river. The biggest problem at first was being able to get bait. A common utterance heard around the docks was “if you could get bait you can catch stripers”. This for the most part has been true. Mother Nature on the other hand has a completely different idea. She decided to make the river unfishable either through muddy conditions or 35 plus mph winds. I am sitting on my boat typing this in between the rocking and the rolling caused by the wind gusts. We canceled our trip today due to the deplorable conditions.

I had a group that failed to show up on Saturday so I went out with some of my good friends on the river. We battled the wind and the cold but did manage to land eight stripers including a double. In fact, we ran out of bait and where we were fishing we couldn’t find any more either by stooly or jigging. All that kept ringing in our heads was “if you could get bait you can catch stripers”.

Yesterday’s trip saw more of the same. I saw several boats out all looking for bait to no avail. The river was just too muddy. The guys in my charter party new that it was going to be tuff but they just wanted to go out on the river for a boat ride and enjoy a day off from work. A buddy of mine did give me two herring out of his live well that he had been keeping and we chunked those up and fished them. We managed one good sized catfish and missed a least one striper bite. I think that once the wind lies down and if the rain holds off things should get back to normal.

I received an e-mail from Kris McShane from the DEC who manages the Hudson River Striper project. His group has been out tagging stripers and have been successful as of late. There are still plenty of fish in the river. Also, on the bright side the river temperatures have come down and are now in the lower fifty degree range.

4/19/2012     Mother Nature has blessed us with an early striper run here on the Hudson River. Striper fishing has been absolutely stellar! I have been fishing on several different boats and the Ace was out finally out on the water yesterday. Bait is a little tough to come by but once you have it, look out. We managed 23 bites yesterday and landed 8 fish. That’s right! 23 legitimate bites. My buddy Woody who I often work with on a daily basis on the river had even more than that. It was an absolute blood bath. Our best fish yesterday was a 38″ 26lb cow landed by John Nastasi from Syracuse, NY.  John seemed to have the touch as he landed 5 out of our 8 fish. As of right now I have a few dates left in April and May 2nd which is a Thursday. Call me at 413-346-7675 if you’re interested. You can also e-mail me.

4/16/2012     The last few days I have been out fishing with good friends and we have been catching stripers in the Albany to Coeymans area. At first the bait was hard to come by as they were not responding very well to jigging and we had to get from by stoolying. That has changed as we have been able to jig them up the last two days. I have fished on three different boats and mine is finally ready to splash. Given this, I will be looking to move up a few of my charters to fill in the rest of this week and all of next. This would be an excellent time for new charter clients to join us. This is an early year for striper arrival and it is our wish to take full advantage of it for as long as it lasts. Typically we do not book trips this early in advance because we want Ace Charter clients to have the best possible chance to boat stripers, especially mature ones!

The bottom line is that the stripers are here, the bait is here, and the fish are biting. We are now booking for the last week in April weekdays and I have this weekend available April 21st and 22nd. 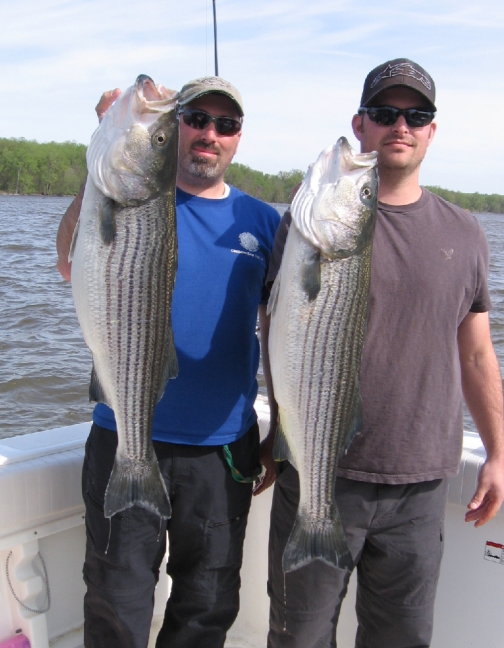 4/10/2012     The “Ace” is almost ready to make its annual journey to Coeyman’s Landing Marina to take its shakedown cruise in anticipation of fishing for Hudson River stripers. We have spent the last several days detailing the boat and checking out all the on board equipment which seems to have come through the winter just fine.

I have been in touch with several of my fishing buddies as well as other charter boat captains. There have been reports of fish being caught in the 30-34″ range as far north as Troy. There have also been several reports of fish being caught in the Kingston/Newburg area with some fish being trolled up. This is good news. Usually when the Kingston guys start getting them, we will see a good push of fish show up in Coeyman’s area about a week later.

The only concern right now is getting bait this far north. It has been spotty as of late. I would expect it to get better as the water warms and time moves on. I spoke to one local fisherman who was able to jig up one herring. He chunked it into three pieces and managed two bites and landed both which were in the low thirty inch range.

As of right now I have four dates left to fill. They are May 3rd, 17th, 22nd, and 24th. I also have a few half day afternoons and mornings left in April and May. Please contact us if you would like more information or would like to book a trip. Phone # 413-346-7675  or www.acecharters.com.

3/9/2012     The days are starting to get longer and longer and that can only mean one thing to a Hudson River Striper fisherman and that is it’s time to start getting ready for the annual spring striper run. So what is there to do and how do we go about it?

If one hasn’t done so already, it sure would be a good time to service your reels for the upcoming season. If you’re not comfortable doing it on your own, there are several companies that can do it for you. Two that I highly recommend are Tuna’s Reel troubles and St. Peter’s Outfitters. Either one can be googled up and both provide great service at reasonable prices. It would be a good idea to strip off the old monofilament before sending the reels in for service or servicing them yourself. I use an electric drill with a threaded rod to put through an empty spool for this task. I use fender washers and wing nuts to tension the spool on the threaded rod so it doesn’t slip when stripping off the old line.

I prefer thirty pound test Momoi line for my main line applications because it is super abrasion resistant and super strong. When on anchor, I Ieader down to 20lb test monofilament and Carolina rig to a swivel which is attached to 40lb fluorocarbon leader snelled to a 7/0 Mustad Big game hook. I pre-tie several leaders on a swimming noodle in preparation for lost hooks due to snags.

Getting the boat out of storage and cleaned up is the next big endeavor. This includes washing the inside and outside of the boat. I have access to a steam cleaner which makes for an easier job. Bottom paint is touched up as needed and the outside of the boat is waxed and buffed. The battery systems are checked out and brought back to full charge.  All electronics are brought back onto the boat and re-installed. As a side note, all electrical connections were covered with di-electric grease before going into storage. This virtually eliminates any corrosion problems come springtime. Hopefully all the electronics fire up without any problems.

All the necessary tackle as well as the rod and reels are brought on board and stored away in anticipation of future use. This is where I usually start daydreaming about being on the water and catching fish. In my mind’s eye, I can see the other fisherman out in their boats waiting for a striper to pick up a bait and “run” with it. I can hear the river. I can smell the water. Back to reality. Last but not least we have to fire up the motors to make sure that they will run. Hopefully all goes well for this momentous event.

If all goes well we will be fishing the Hudson River for stripers during the last week in April until at least Memorial Day in May. As I write this, we still have a few dates left to fill for charters. It’s my belief that given the mild winter and lack of snow that this spring run will be earlier than normal. With the enormous amounts of rain and subsequent loss of fishing days last year, the schools of stripers in the river received very little pressure which should make for a larger than normal run this year. Let’s hope the weather co-operates this year so that we can thoroughly enjoy the Hudson River striper fishery.

Capt. Jimmy Samia owns and operates Ace Charters and has been doing so for well over a decade. He can be reached at 413-346-7675, e-mail or you can visit us on the web at https://acecharters.com.