Well another season has come and gone on the mighty Hudson River and some of the highlights and challenges will be listed in this Hudson River fishing report. The season started out as predicted with a huge biomass of breeding class stripers arriving in the Coeyman’s and Albany area around ten days after the river temperatures reached 48 degrees in Piermont. There were also many bigger fish over 40″ in the mix as well as a larger number of overall sized bigger fish pound for pound.

Under the new regulations imposed this year (2015), fish between 28″-40″ had to be let go as they were being protected this year as SLOT fish. Any fish 18″-28″ could be kept as well as any fish over 40″. Two of our Ace Charters clients were fortunate enough to land stripers over 40″ this season. Client Nick 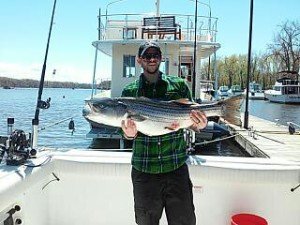 was able to successfully land a 41 5/8″ beauty which also had a tag in its stomach put there by the Federal Fish and Wildlife Service. Nick will be eligible for a pin stating that he did in fact catch this fish. Client Steve 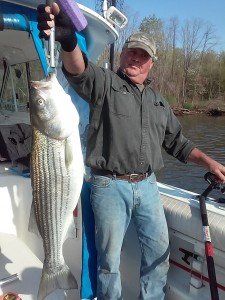 also landed a 40.5″ cow striper with us only a few days later.

This season started out with a bang! Our clients were catching stripers and plenty of good ones,too! But, there was a twist! Normally in the beginning of the season we would find ourselves fishing off of anchor. Although we did do this the first couple of days and did catch fish, the brunt of the stripers had moved into the center of the channel. We started catching fish drifting in 52 degree water which is at least 4 degrees colder than normal for good drifting.

What started out be looking like one heck of a season quickly took a turn for the worse. We had 90 degree days during the first week of May which is totally unheard of for around here. Want to guess what this did to the water temperatures? They literally shot through the roof. We went from having frozen water during the second week of April to 68 degree water by May 11th. As those of you who know, the preferred spawning temperatures of sea run striped bass in our neck of the river is 64-65 degrees. These temperatures were reached as early as May 7th, but the stripers still did not spawn. It’s my belief that chronologically it was still too early for the fish to spawn. They just weren’t ready. So, here we had a river full of striped bass inhabiting water that they normally would never even be seen in up where we are. The fishing remained good until the temperature peeked out at near 70 degrees and then started to cool. The fishing cooled right down with the drop in river temperatures as well. We still had stripers to fish for as evidenced by the sign on the fishfinder

With a picture like this we most likely will catch fish

, but they would not bite.The warm water had them in shock!

This is where it is good to have friends! My buddies Matt Trombley and Eric Steele who fish out of Kingston,NY were still on fish. The river temperatures down south were still below 64 degrees! On May 15th, we decided to pull the“Ace” and move her down to Kingston to finish out the season, or at least salvage what we could. Here I would like to go on record and say that pound for pound, I do believe that the average fish size that we catch here out of Coeyman’s are much larger than what are harvested out of Kingston. That being said, catching some fish is better than catching no fish and calling it quits. Clients were given the option to either come down and fish Kingston or have their deposits refunded and given first right of refusal for the 2016 season. All but one group decided to give Kingston a try.

We did catch fish or have opportunities to catch fish everyday in Kingston.  But, once again, the overall size of the fish tended to be smaller with a lot of schoolie males in the mix. One other note that needs to be mentioned is that we strictly trolled stickbaits while fishing out of Kingston. And, once again, a big thanks to Matt and Eric for supplying us with some of the hotter stickbait colors to fish with and also where to fish them as well.

Once again, Mother Nature always has a way to keep you humble when dealing with her. In the over 22 years I have been fishing the Hudson River, I have never seen the striped bass behave like this, nor have they ever had too! In fact, I’ve never seen Striped bass hang around in the river past 65 degrees in the over two decades I’ve been fishing it! I don’t think that the stripers were any more immune to Mother Nature than we were. They were placed in a situation that was totally new to them as well.

Overall, I think we had a stellar season. We only had two days where the stripers eluded us.One was just due to very nasty weather and totally unfishable conditions while the other  was just due to plain old bad luck. We had six fish hooked up on the second of the two bad days which all managed to escape. Do I think that the weather we experienced this past season will become the new norm? Absolutely not! Will we still continue to call Coeyman’s Landing our home base? You betcha! Will we again be willing to move the boat should fishing conditions as dictated by Mother Nature indicate? Oh Yeah! Count on it!

We are now off to Lake Ontario to run our fishing charters there for the rest of the summer. Hope to see you there.