Hudson River Striped Bass, Hudson River Stripers, Rock Bass, Stripers, etc. are all common names used when referring to the quarry that we all love to fish for every spring on the Hudson River. Stripers are sort of unique in that they are an anadramous fish, being they come from salt water into fresh water every year to spawn and procreate their species. Here at Ace Charters, we anxiously await the coming of these fish every year to take our clients out on the Hudson River to fish for and hopefully do battle with some real monsters. 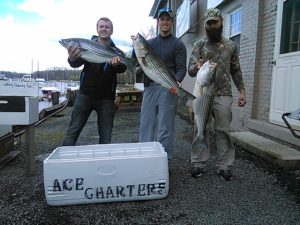 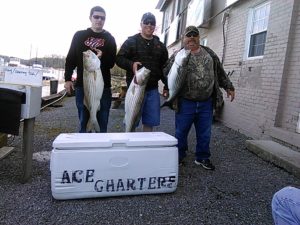 Once the temperature reaches 48 degrees in Long Island Sound, approximately 7-10 days later we will have mature sea run Hudson River striped bass in “catchable” numbers swimming in the upper Hudson River section all the way to the Troy Dam. This is the time when you will see boats begin to accumulate up and down the River as the word gets out that the run is on and the fish are in. In some of the more popular areas, it can become an absolute zoo with a congestion of boats vying for a chance to catch a striper bass.

We have seen Hudson River Striped Bass arrive as early as the first week in March during unseasonably warm weather but usually, the mass of numbers arrive here during the last week of April and will remain in the River until the river water temperatures reach and exceed 64 degrees; the preferred spawning temperature of sea run Striped Bass. Typically, the water temperatures will reach the 64 degree mark sometime around Memorial Day, but there are times during cooler springs that the stripers will remain in the River all the way into the first week or two of June. The stripers trigger to spawn is very temperature dependant as is their key to leave the River at post spawn. Once the spawning reproduction is finished, the brunt of the striper schools will waste no time exiting back into the Atlantic Ocean!

The Hudson River is one of the top spawning bodies of water for Striped Bass in the northeast. Striper reproductive biology dictates that fertile striper eggs need to remain suspended for 3-5 days until they hatch and become mobile with their egg sacks in tack. Being tidal waters from the Atlantic Ocean all the way up to the Troy Dam, the rise and fall of the Hudson River along with the change in water flow direction create a perfect environment for the Striper progeny to remain suspended, for if the striper eggs sink to the bottom of the river, they will silt over and fail to hatch.

Male striper young will inhabit the Hudson River until they reach sexual maturity at three years of age. Female stripers become sexually mature at the age of five remaining in the Hudson River during this time as well. Both sexes leave the River and head for the Atlantic Ocean once they reach their respective maturities. Now for a few interesting points. Stripers do not smolt like salmon do. In other words, they do not imprint to the body of water in which they were born in. Stripers are not “required” nor do they have any biologically need to return to the same River every year to spawn like a smolt salmon. Furthermore, they do not always return to the same sections of the River every year, either. Stripers also do not mate for life and are polygamous. During a typical striper spawning episode, there can be as many as 5-7 males mating with one female.

One of the practices employed by Ace Charters is to encourage the release of older mature sea run female “cow” stripers and here’s why. Cow stripers that reach weights in the high twenties and over are typically over 20 yrs. old. They are also proven spawners capable of producing millions of eggs at breeding time. Younger fish, like those weighing in the teens, typically produce only a half a million eggs or so. So as you can see, a larger, older, mature female can contribute over three times as much towards continuation of the species. The younger fish also make for much better eating, too!

Are Hudson River striped bass safe to eat? The answer is yes! Stripers do not remain in the River long enough to absorb any biological magnification of River water contaminates during their immature years. Secondly, sea run striped bass feed almost exclusively on anadramous sea run herring species ( River Alewives and Bluebacks) while spending their time in the Hudson River waiting for the ideal spawning time to arrive.

Come spring, Hudson River fishing charters as well as recreational anglers can be seen all along the Hudson River fishing for sea run striped bass. Typically from the end of April till sometime around Memorial Day, striped bass will be inhabiting the Hudson in anticipation of their annual spawning ritual. As it has been for many years, Ace Charters will be there as well!