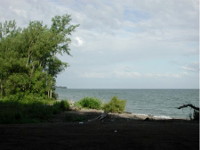 New York’s greatest lake, Lake Ontario, is world-famous for it’s size and diversity. It produces vast populations of king salmon, trout, walleye and other fish. Lake Ontario is fed by the Niagara river and empties into the Atlantic Ocean via the St Lawrence river. With an average depth of almost 300 feet, it provides an environment depended upon by fish, birds, plants and land wildlife. It is vitally important to animals, the economy, and the people of New York.

With experienced Captain Jimmy Samia you’ll conquer the king salmon, trout and even walleye of the 200 mile long Lake Ontario. Captain “Ace” Samia has more than 30 years experience providing guided fishing trips for families and friends and he knows when and where the fish will bite.

Oswego, NY is known as The Port City of Central New York and is a small historical city which serves the economy of Lake Ontario. The outdoors is in the blood of the residents and the economy centers around tourism and the outdoors.

Oswego has a distinct and important history. The city served as a location for a British trading post in the 1700’s and was once a major railroad hub connecting multiple lines. Today Oswego celebrates the Harborfest festival each year which draws hundreds of thousands of visitors to celebrate their town and their unique connection to Lake Ontario. Here are a few interesting facts about Lake Ontario you might be interested in. 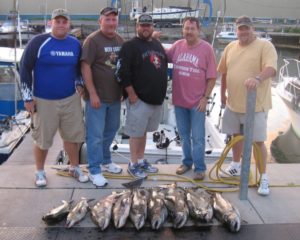 It’s that time of the year again when all good things must come to an end and this year is no different ……….. except we are closing out one of the best ever seasons on Lake Ontario. Fishing for king salmon this year was at its best. Beginning in June, and all the way through the second week of September, Lake Ontario fishing has been superb. Even when the weather wouldn’t allow us to go after king salmon, the brown trout fishing was there. We caught brown trout weighing into the teens and were sometimes rewarded with a king salmon in the mix along with steelheads trout lake trout and atlantics while plying brown trout waters. Limit catches were more common than not.

Ace Charters targets many fish of Lake Ontario. The king salmon or chinook salmon was brought to Lake Ontario and helped to restore the fish population. They live their entire lives in fresh water and are normally in the 15 lbs to 20 lbs range. The brown trout has also adapted well to the lake and can live up to 20 years and grow to more than 20 lbs. Although smaller than the king, the coho salmon is known for its flavor and ranges from 8 to 15 lbs. Lake Ontario also has rainbow trout and the more flavorful steelhead which can be caught up to about 10 lbs. New York is famous for its lake trout which are larger, up to about 25 lbs, but are harder to catch as they tend to move into deeper waters during the summer months. Learn more about these Lake Ontario fish species.