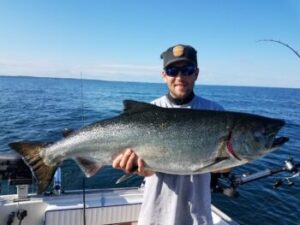 The most sought after of all Lake Ontario fish species is the King Salmon: Local anglers often call the Chinook salmon a king salmon which is a name more recognizable to New Yorkers. This species is relatively prolific in certain areas of the world including the north Pacific, Alaska, North American rivers and north Japan. 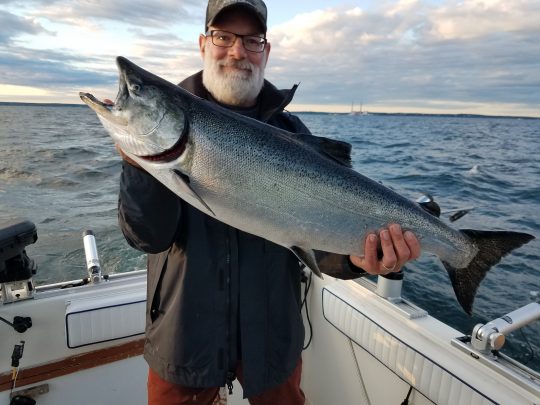 Chinook have been successfully introduced either intentionally or accidentally to many other areas including South America and New Zealand. They have proved what a vital and resilient species it can be when given an opportunity. Chinook salmon have been successfully used in aquaculture and are prized for its high dietary quality. Where managed improperly king salmon are on some endangered species lists.

Although not a native species locally, the king salmon was introduced to the Great Lakes where they flourished. An interesting point is that this species is normally anadromous meaning it that it spawns in freshwater and migrates to the saltwater ocean to mature. When introduced to the Great Lakes the species spawns in available rivers and then grows and matures in the lake without ever needing to experience saltwater. 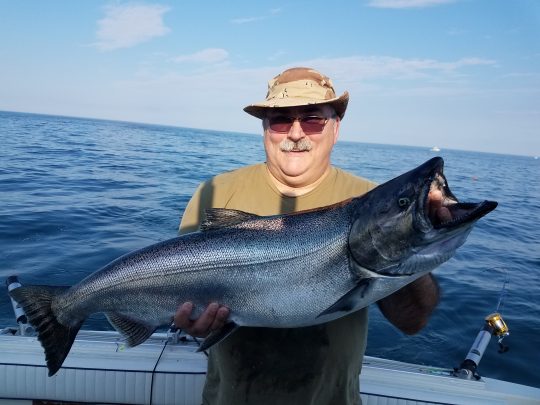 King salmon in our area are an elongated shape and are normally dark bluish or greenish grey on the top blending down to silver and then white on the belly. They also have black blotchy spots on the top half. Kings may completely change colors in different phases of their life cycle and during spawning. In Lake Ontario king salmon normally range from 15 lbs. to 20 lbs. The current NY record is 47 lbs. 13 oz. caught in 1991. Considering recent 2012 catches many charter captains like Capt. Jimmy believe that this state record will likely be topped and re-topped several times in the coming seasons. Folks, now would be the perfect time to come enjoy a charter that potentially could develop epic fishing opportunities.

Brown Trout: The native Western European brown trout was a favorite of the British colonial empire and was dispersed in the 1800’s. New York Fish Commission culturists began working with brown trout in 1883. They began to successfully establish the species in streams, rivers and lakes throughout  New York State. 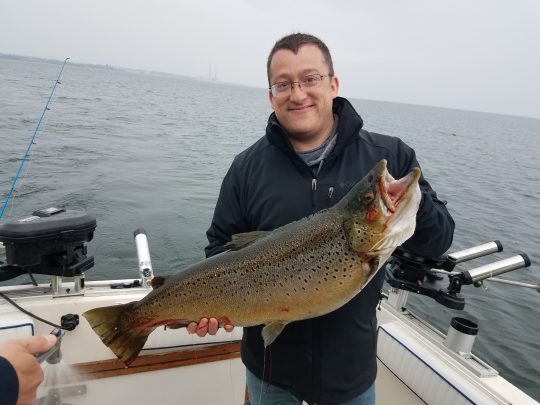 Brown trout were being established in 40 states of our US waters through stocking. They have now become self-sustaining in at least 34 states. New York is considered to be one of the more successful programs in this establishment. Brown trout are anadromous naturally but have adapted well to their NY placement. They  developed a non-anadromous sub-species. Cold water stream bred trout rarely exceed 20 inches. Lake Ontario browns can reach and exceed 20 lbs. The current NY record was caught near Oswego at 33 lbs. 2 oz. in 1997. 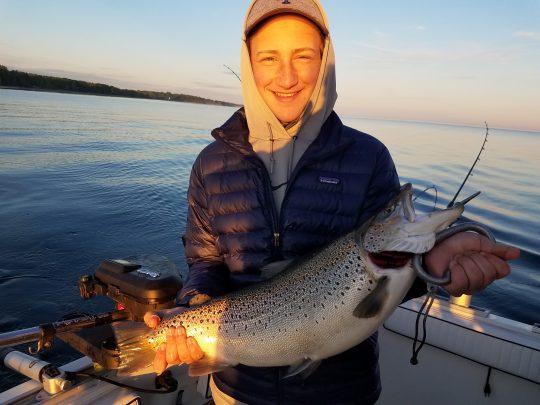 Brown trout often live to ages near 20 years. In Lake Ontario, this means that brown trout continue to successfully adapt to its surroundings. It also continues to evolve into a larger potential size with each successive generation. Although brown trout compete with other larger Lake Ontario fish species, their continuing increase in size is encouraging for future angling possibilities.

Coho Salmon: Also referred to as silver salmon or silvers, the coho salmon is another anadromous species that was introduced to Lake Ontario from various US and Canadian fish management sources. Known for its size, strength, and having a similar high fat content like kings, the coho is prized as quality table fare. It is also excellent cold smoked.

Coho have a  color pattern of dark bluish grey on the upper back with a mostly silver side fading to a white belly. The sides have some black spotting on the upper portion and the tail is silver and edged with black. This second most prolific species average in size between 8 and 15 lbs. The NY state record at 33 lb. 7 oz. was caught on 8/13/1998.

Atlantic Salmon: is known as one of the larger salmonoid species second to the king. More often associated with the Atlantic Ocean and its immediate tributaries, Atlantic salmon occasionally occur in Lake Ontario catches. Atlantic salmon are able to live landlocked in entirely freshwater environments. They have developed a less migratory spawning cycle. 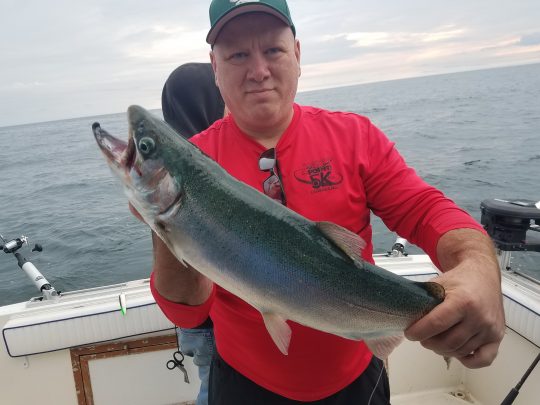 Atlantics can vary greatly in coloration by its life stage as well as its location. Lake Ontario adult Atlantic salmon tend to be all silver with a dark blue, green or brownish top area and small spots on its entire body and tail. During spawning the coloration changes and can vary significantly from fish to fish. The fins other than the adipose are edged in black. The average size adult Lake Ontario caught Atlantic salmon is anywhere from 8 to 14 lbs. The NY state record catch being 24 lbs. 15 oz.

(Steelhead) Rainbow Trout: The rainbow trout and steelhead are actually the same species. The domestic rainbow spends his entire life cycle in freshwater. The steelhead is a sea run trout that has returned to freshwater after 2 to 3 years at sea. This species has been introduced for food as well as sport worldwide. 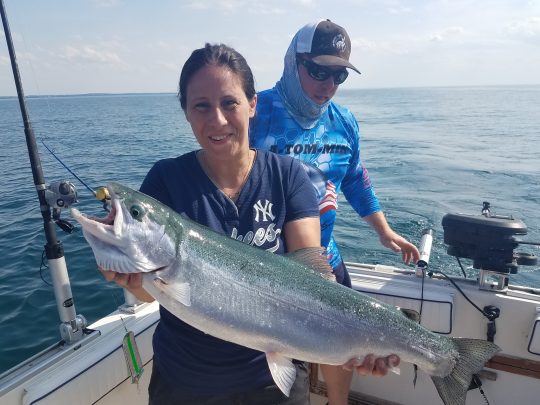 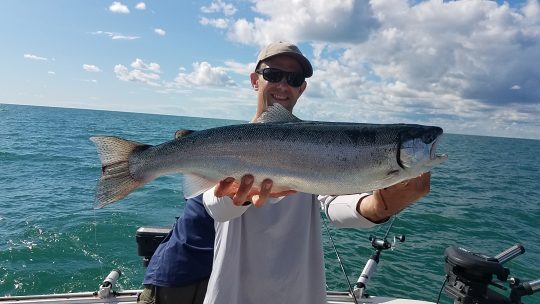 Steelhead tend to be a copperish green throughout with an iridescent scarlet coloration through its mid-body. They have small black speckles on their body and fins. The average size Lake Ontario steelhead is right around 8 to 10 lbs. with the NY state record being 31 lbs. 3 oz.  caught as recently as 2004.

Lake Trout: This is a favorite native species of many North American waters as witnessed by all the various names associated with it including, specks, speckled trout, grey trout, lake char, mackinaw, togue, paperbelly, and siscowet. Although it has  been introduced to waters worldwide, it is still considered to be relatively rare even in its native waters of Canada and the US. This is a highly prized food fish and known hard fighter. 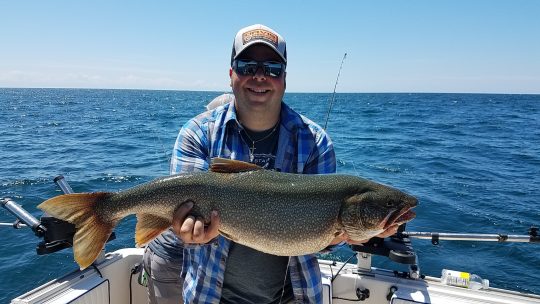 Lake trout can be described as a predominantly greyish green with white blotches throughout its body and fins. The fins tend to be a brownish gold and are also spotted in white. The average size of this species in Lake Ontario is around 15 to 25 lbs. with the NY state record being set at 41 lbs. 8 oz. caught in Lake Erie in 2003. Although lake trout are sometimes catchable in the colder water seasons, their natural instinct to go to the deepest part of the lake during the summer months make them less of a target for Oswego charter boats than other species.

Multi Species To Choose From In Lake Ontario

As you can see from this Lake Ontario fish species page, Ace Charters always seems to have plenty of large hard fighting fish to choose from. Although our trips usually are for larger fish like king or coho there is still the possibility of hitting another popular species while fishing for something entirely different. That is what is great about Lake Ontario fishing, there is always something available, so if one fish isn’t hitting, then we can change up and target another species entirely.

Lake Ontario also has fantastic populations of big walleye and smallmouth bass ,too!.